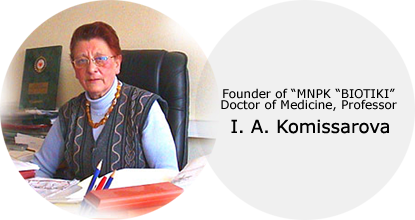 «To fight, to search, to find and not to surrender»

Irina Alekseevna Komissarova, the founder and, for almost 20 years, the permanent head of the Medical Research and Production Complex (MNPK) BIOTIKI, always had this motto.

Doctor of Medical Sciences, professor, from the family of doctors. Her father was a physician, hematologist, he worked as a doctor during the World War II. For sure, her daughter inherited a fundamental biochemical bias from him.

In 1961 she graduated with honors from the pediatric faculty of the 2nd Pirogov Medical Institute. In the special issue of the newspaper "Soviet Medic" (24.06.61), dedicated to the graduates, there were truly prophetic lines under the portrait of I. Komissarova:

"It happens so:
They’ll come, they’ll leave, look – they’ve disappeared.
But these, since graduated,
Will leave a bright mark!"

And the mark was really bright. She worked as a doctor at the Moscow boarding school #15, as a research assistant at the Institute of Hygiene and Health Protection of Children and Adolescents. She studied the molecular basement of immunopathology at the Department of Therapy and Prevention of Diseases of the Moscow Medical Academy. She studied the issues of experimental and clinical pharmacology at the Research Institute for Biological Testing of Chemical Compounds. She also was engaged in research activities at the Institute of Biotechnology.

The key goal in the life of Irina Alekseevna has always been and remains the protection of the internal life of human body, functional medical researches of pathology and the creation of safe drugs based on natural metabolites. Fortunately, the goal was achieved. Glycine, Limontar®, Biotredin®, Eltacin® – medicines created by I.A. Komissarova, are aimed at correcting metabolism in the organism, preventing diseases and protecting human health.

I.A. Komissarova was awarded the Highest Russian Public Award – the Order of St. Alexander Nevsky "For Works and Fatherland" I degree for her great personal contribution to the development of domestic pharmacology.


In the E-mail field, enter your email or phone!
Products you want to ask about:

Check the correctness of filling all the fields